Eastern Pressure Records kicks off the new decade with a release from the talented SilverFinger Singh, MC/Producer and presenter of the Monday Night Mixtape Show on BBC Radio Leeds. SilverFinger has music in his blood and is the son of percussion maestro and music producer Mr. Inder Matharu aka GoldFinger who worked with the likes of Fun-Da-Mental, Det-Ri-Mental, Transglobal Underground, Ian Brown and The Winachi Tribe. SilverFinger Singh’s debut release in 2018 ‘Education Road EP’ put him firmly on the map with radio support from the BBC Asian Network, BBC Radio Leeds, BCB Radio, TV Conwy, Irvine Beat FM, Radio Sangam & Soho Radio, as well as support from numerous tastemakers in the scene. SilverFinger also gained the attention of event and promoters with performances at Lyrically Justified, Hyde Park Unity Day, Shiiine On (Rotterdam), as well as supporting legendary acts such as Ian Brown from The Stone Roses, the chart-topping Panjabi MC, Hip Hop’s first super group The Sugarhill Gang and many more.

‘EKTA’ in Hindi/Punjabi translates to ‘Oneness’ / ‘Unity’, something we are sure you would agree is something the world needs right now! It’s a slice of double tempo bass heavy music that is destined for big things. Lyrically it’s positive vibes all the way through which is complimented by his intricate flow and excellent wordplay. The infectious reggae fused chorus with solid musical production really gives this track its own identity. Mixing up a unique fusion of Hip Hop, Reggae, Bhangra, Dubstep and Asian Breaks, ‘EKTA’ is something we are sure you are going to enjoy.

This single release comes with three remixes, the first from the superb The Winachi Tribe who deliver an excellent dancefloor interpretation with its grooving bassline and driving drum breaks. Also included is a version from the Singaporean music producer Rash Frantic who delivers an electro house banger that will get everyone moving. Lastly is the hefty breaks remix from Juttla, a man who has remixed the likes of Marshall Jefferson, Foreign Beggars and more. With four different versions we know you will struggle to choose a favorite which is why we advise you to get all of them. Everyone needs some ‘EKTA’… 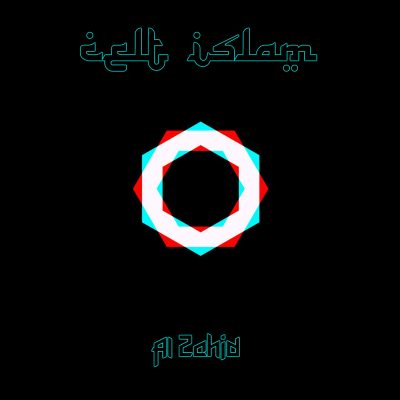 Eastern Pressures eighteen release comes from Manchester based Celt Islam, a pioneering music maker creating intricate trans-national electronica with a futuristic dub twist. His sound fits brilliantly with what the labels sound and we are sure you are going to love this four track EP as much as we do.

Celt Islam takes musical influence from all styles of music from dance, dub, electro, jungle, trip- hop, leftfield, dubstep and much more. His open-minded approach has led to him playing live at various European festivals such as Ozora and Hadra as well as being chosen to perform at the 2010 BBC Introducing Stage at the infamous Glastonbury Festival.

His live set is has led to him building a dedicated fan-base and has shared stages with a diverse selection of musical greats including Public Enemy’s Bomb Squad & Hank Shocklee, Eat Static, The Orb, Youth, Hardfloor, Engine Earz, DJ Bobby Friction. Celt Islam has cemented a name in the world of music and with this EP the journey continues this really is something so special.

1-Ilm Al Yaqin catches the ear from the suspense and the off kilter drum intro which rides along moving and shifting under a sea of well worked pads and effects. This talented producer once again shows his skills as he keeps switching from glitchy stepped out musical madness to deeper adventurous mysterious undertones.

2-Human Mystery twists up futuristic dystopian atmospheres with a solid dub influenced bass- line and dubstep infused groove. Eastern acoustics, Tablaís and Western bass music really do meet up here for something special. Appealing to ride range of music DJís and music fans, this is not a track to be slept on.

3-Al Zahid begins with a deep mechanical sound-scape before crashing into a frenzy of punching sub bass and stepping sharp drums. With mystical Eastern undertones the track swirls and grooves in such a unique manner with intricate musical statements throughout. This is something true tech-step drum & bass fans will adore.

4-The Strangers is a superb fusion of Asian influenced musicality with a UK dubstep bass vibe. This track takes no prisoners with a rolling tabla and clever percussion with excellent drum programming leading up to a massive dub reggae crescendo. Already a favourite on the dance- floor, this is something you need in your collection. 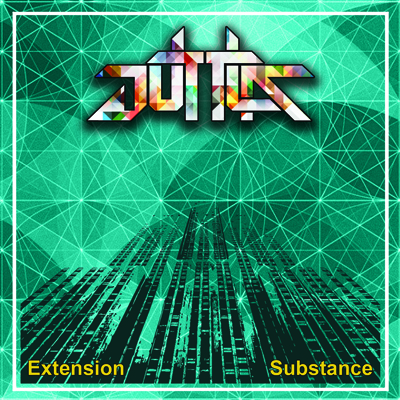 UK producer Juttla drops his new digital single, a two track release which all fans of drum & bass music need to pay attention to. For those that don’t know Juttla’s past achievements they include releasing music on Back 2 Basics, ZYX Germany, Nation Records, Swaraj Records, and many more as well as touring the UK. He has played live at Glastonbury and all over the UK, as well as rocking dance-floors Cape Town, Amsterdam, Brussels, Paris, Warsaw, Rome & Sicily.

Juttla has also had the support from a string of tastemakers as well as radio support from BBC Radio One, BBC 1Xtra, BBC Asian Network and most of the leading international on-line stations. His production talents have led to Juttla being commissioned to do official remixes for Marshall Jefferson, Asian Dub Foundation, Foreign Beggars, Y2K Records, Wayward Soul and more.

The first of two tracks; ‘Extension’ enters with a cinematic intro which creates a unique vibration before dropping into a rolling punchy drum pattern with a series of excellent intricate drum fills & rolls. The growling undertones of the bass compliment the strings & atmospherics leading up to superb break down which is guaranteed to rock any dance floor.

The second track on this release ‘Substance’ is no ‘B-Side’!!! Avoiding all of the typical adjectives for drum’n’bass, Juttla once again steps beyond the typical. This minimal full-throttle stepping powerhouse of tech fuelled greatness is already a favorite with a number of DJ’s, this is destined to massive. 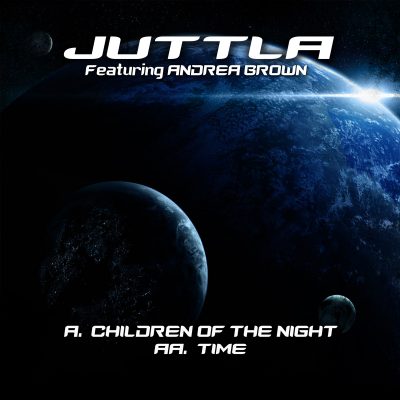 UK producer Juttla has teamed up with talented vocalist Andrea Brown for his new two track digital single. For those that don’t know Juttla is no new comer to the music scene and his past achievements include releasing music on labels such as Back 2 Basics, ZYX Germany, Nation Records, Swaraj Records, Wolftown Recordings and many more as well as touring the UK, played live at Glastonbury twice as well as rocking dance-floors Cape Town, Amsterdam, Brussels, Paris, Warsaw, Rome & Sicily. Juttla has had radio support from BBC Radio One, BBC 1Xtra and BBC Asian Network as well as being commissioned to do official remixes for Marshall Jefferson, Asian Dub Foundation, Y2K Records, Wayward Soul and The Disablists & Foreign Beggars.

The single kicks off with ‘Children Of The Night’ an eerie groove that builds so well with Andrea Brown’s unique vocal delivery and style. Juttla rolls out the beats introducing various atmospherics and bass sounds to create a deep stepping drum’n’bass anthem. This is a track with a future soul vibe and something perfect for radio and the dancefloor.

The second track ‘Time’ compliments the A-Side so well as it takes it down to 140bpm for a vocal dubstep track. Once again the track builds so well as Andrea Brown’s lush vocal swagger blesses the groove like a musical marriage. The production on here is outstanding with some brilliant use of strings and bass. You will agree… it’s ‘Time’… it must be a dub thing… 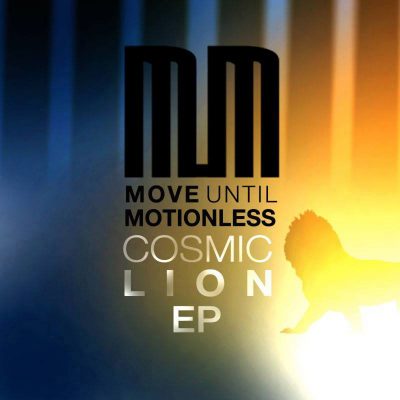 ’Cosmic Lion EP’ is a brand new four tracker from Eastern Pressure that showcases the talents of the Midlands based duo Move Until Motionless aka M.U.M. The summer has finally arrived and it’s time for some dubbed out grooves with a modern electronic cinematic twist.

Fusing experimental forward thinking sounds with a dancefloor vibration is something that M.U.M do so well, and this debut EP is something to get really excited about. From the EP’s first cut ‘St. Mandolinas’ you know this is special. Entering with a reggae styled piano riff it’s not long before the bass drops and the drums kick in to maximum effect. This is the perfect soundscape to begin proceedings on the EP. ‘Revelations’ drops next and is a percussive rolling groove that fuses a superb synth line with swirling pads to create a monster of a track.

The third track on the EP is ‘Darbouka Bass’ which is as a deeper more mystical track that is already getting the thumbs up from DJ’s worldwide. This sets us up perfectly for the EP’s last track and the title track from the EP ‘Cosmic Lion’ which wraps up this release perfectly. From the intro you just know it’s an anthem as it mixes up mystical atmospherics with a subtle piano line while executing some excellent percussive drum patterns and a deep modulating bass. 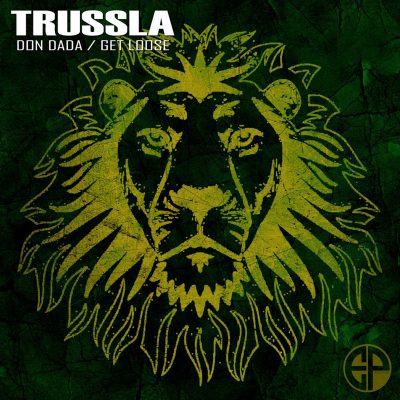 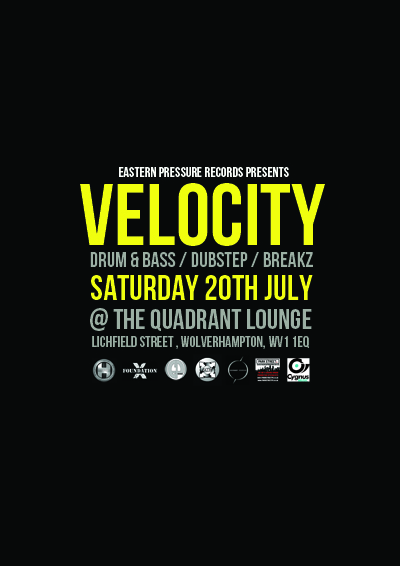 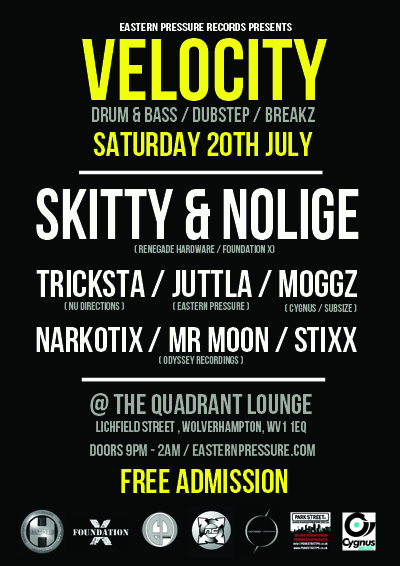 Velocity is a new night for the West Midlands Drum & Bass scene run by Eastern Pressure Records. For our first event we have got together some of Wolverhampton’s most legendary deejays for a night of upfront & classic drum & bass, breaks and dubstep. This opening party is FREE admission and kicks off nice and early at 8pm so come and join us on what promises to be a night of undiluted real bass led music. 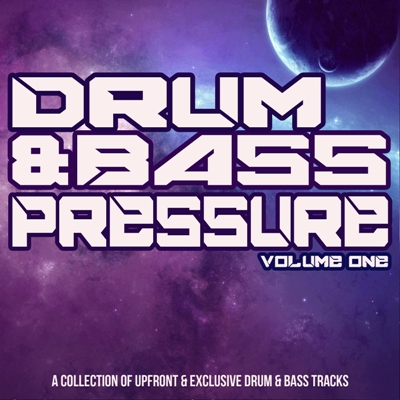 Eastern Pressure gears up to release our third album and first ever label compilation in the form of a new digitally released album series entitled ‘Drum & Bass Pressure’. ‘Volume One’ is planned for release at the end of July and will be heavily promoted as well as having an official launch party in our home town of Wolverhampton.

The album will feature fifteen brand new exclusive tracks from some of the best producers in the scene and will be available from Beatport, Trackitdown, Spotify, iTunes, Drum & Bass Arena, Juno, Chemical, Rhapsody and many more.

We are still taking submissions so if you would like to be involved please send us a snippet of your track or a link to stream your track, as well as letting us know a little bit about yourself. 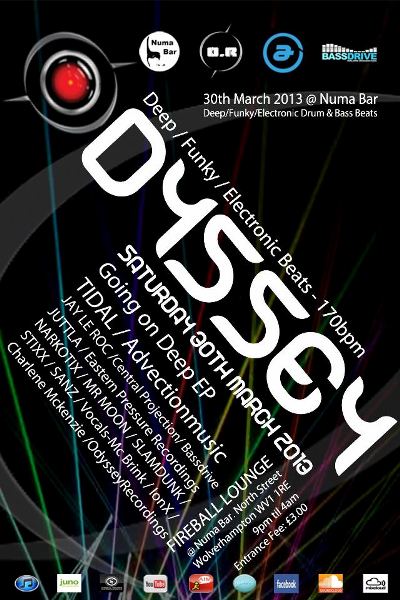 Juttla DJ’s this Saturday at the Odyssey Recodings Launch Party for their ‘Tidal EP Launch’ at the Numa Bar in Wolverhampton. Juttla will join up including Tidal, Jay Le Roc, Narkotix, Mr. Moon, Sanz, Slamdunk, Stixx with MC Brink and vocalists IonX and Charlene McKenzie.

Eastern Pressure Records would really like to thank DJ Flight for playing ‘The Replicant’ by Nolige & Collectiv on the March’s edition of The Next Chapter on leading bass music radio station Rinse FM. It was another great show featuring some brand new music from the likes of Nu:Logic, Alix Perez, Calibre, Lenzman, Marcus Intalex, Krust and manly more. ‘The Replicant’ will be available through all major digital on-line retailers on April 29th.

Anyone wishing to download the show can do so via this link: the Rinse site: http://rinse.fm/artists/flight/